THE Australian Homoeopathic Association’s Your Health Your Choice campaign has taken out a National Award as Australia’s largest campaign to protect natural therapies.

The campaign, managed by the AHA and created in conjunction with media agency Adoni Media was launched on July 18.

Your Health Your Choice unites consumers, practitioners and supporters of homoeopathy, complementary medicine and natural therapies like never before.

In accepting the award Mr Dendrinos told the 400-strong crowd that Your Health Your Choice was “a campaign that is not just owned by the AHA but owned by all of you, together, to protect the rights of people to improve their health, so thank you”.

More than 10,000 people joined Your Health Your Choice in its first week and four months on, the campaign website shows nearly 70,000 signatures. 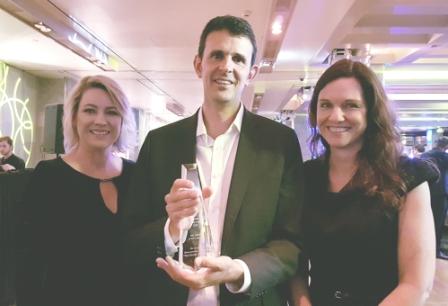 The campaign is designed to give the two in three Australians who use natural medicines a voice against regulatory change and bias that’s threatening consumer choice in healthcare.

Consumers are fighting alongside practitioners, angry at ongoing attacks.

When the Federal Government announced it was cutting the private health insurance rebate for natural therapies more than 32,000 people signed up and joined Your Health Your Choice in a matter of days.

The campaign, which sends letters on behalf of supporters to Federal MPs, is calling for a Senate Inquiry into the National Health and Medical Research Council’s review into homoeopathy.

Australian journalist and founder of Adoni Media, Leisa Goddard, said Your Health Your Choice represents all 17 modalities that are being targeted, including homoeopathy.

“The objective was to give people a voice that would be heard in Canberra and we are doing exactly that. Within weeks of Your Health Your Choice being launched the campaign was on the political radar with the Federal Health Department adding it to its current issues list,” Ms Goddard said.

Your Health Your Choice calls on the two in three Australians who use complementary medicines and/or natural therapies to sign the Senate Petition to expose why the Government is ignoring positive evidence that natural medicines are effective.

The digital campaign through Facebook has engaged thousands of people around the world with single posts reaching audiences of more than half a million people.